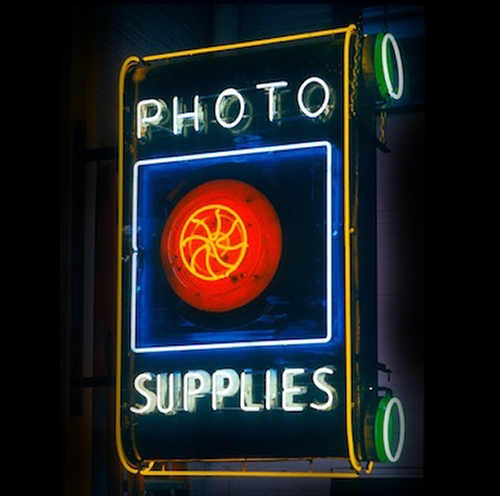 Bob Swartz was a businessman, historian, and expert photographer.  In 1952 he commissioned the 82” tall double sided camera to advertise his photo shop on Lancaster Avenue (the Lincoln Highway). It featured a four point animated aperture and was built by Kunda Signs, still active since 1946.

Shortly before Len Davidson bought the sign in 1998, Swartz reminisced about its history and difficulty in maintaining it: “The animation went into the center and back again. People used to love it. The only problem was the constant flashing off and on bothered the people who lived upstairs.

“A lot of the tubes were knocked out by Hurricane Hazel in 1956 and now it’s much too expensive to have it refurbished. Someone recently bought the property and may tear down the building anyway… The township doesn’t allow overhead signs like that anymore…”

The sign was restored and loaned to a friend’s photo studio in 2000 but it’s now back in the Museum, casting a mesmerizing glow as the camera aperture opens and closes.